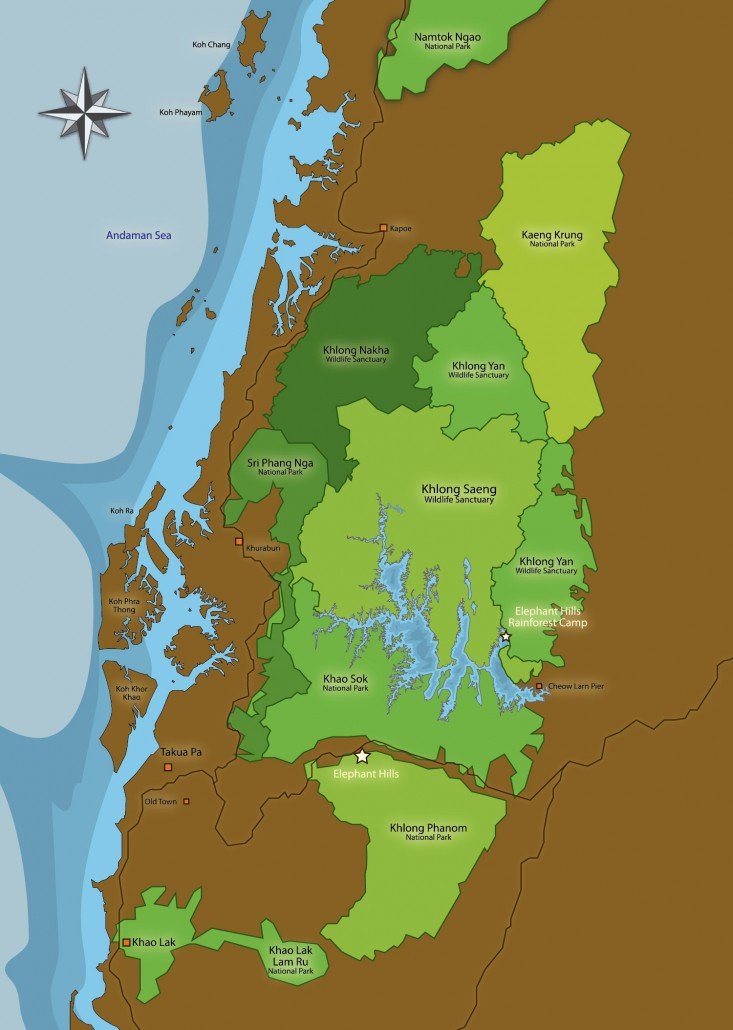 This is also reflected in its rich biodiversity: 48 species of mammals have been recorded to date, including wild elephants, gaurs, Malayan Sun Bears, leopards and many more. Furthermore, 311 species of birds were counted, 38 different species of bats – and of course Khao Sok is home to a huge, so far unknown number of insects and reptiles.

Thanks to its eventful history vast parts of the protected nature park are literally untouched: In 1944 a deadly epidemic led to the nickname “Ban Sop”, “Village of the Dead”. The ever since much avoided area with its countless caves and difficult terrain became the perfect place of retreat for rebellious students in the 1970s to hide away from the government. Only in the 1980s tourism started to discover this breathtakingly beautiful stretch of land – but to date it still is one of the best-kept secrets Thailand has to offer!

If you love Khao Sok national park and would like to support it in some way, please think about contributing to our Children’s Project. 100% of all donations go directly to three local schools in Khao Sok, supporting the youth of today, and the future of Khao Sok.

The moist evergreen forest of Khao Sok National Park belongs to the oldest rainforest area in the world. The history of this place and how it got declared a National Park is intriguing, yet many people have no idea when they enter this stunning spot of natural land. Many of the dramatic historic key events are known to humankind. Still, the trees and sanctuary hills of Khao Sok conceal stories we will never know. 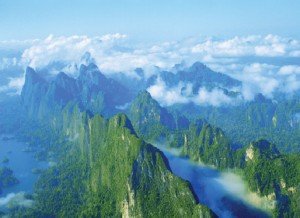 Once upon a time…
Where modern Thailand is today, there used to be an ancient landmass called the Shan-Thai landmass. From that landmass, sediments were washed down continually, accumulating around a delta system at the edge of a deep ocean basin. Those instable deposits of sediments periodically avalanched down into the ocean basin due to heavy erosion. Bit by bit, the sea got shallower and warmer. Soon, the conditions were perfect for corals and other organisms to thrive. 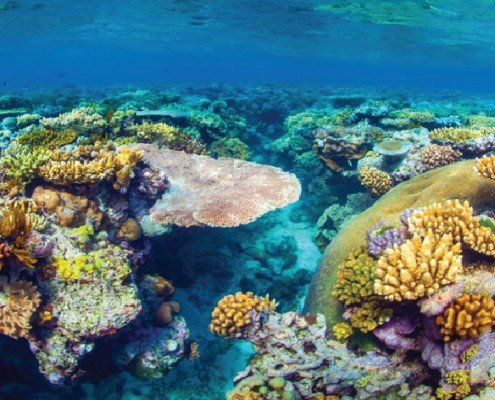 About 250 Million years ago
Finding Nemo instead of Mowgli
During this period the probably biggest coral reef of all times was forming and growing. It is said to have been about five times as big as the Great Barrier Reef in Australia, reaching from the South of China all the way down to Borneo. That is why for example places like Halong Bay in Vietnam, Guilin in China or parts of Southern Thailand have a very similar topography. All of today’s Khao Sok and its national park used to be under water as part of this gigantic coral reef.
The piling of the different sediments is quite complex but plays a major role in the formation history of the limestone mountains. When the marine eco system got deeply buried under new sediment, the emerging pressure created the stunning limestone rocks we see here today throughout the elephant junge sanctuary.
Since temperatures here only varied slightly due to the area’s humidity and island geography, the last ice age merely affected the forests in this area. However, it has caused the sea levels to rise and fall, altering the landscape. The result of this was a beautiful, life-attracting river system which exists to date as one of the most enticing vacation destinations. 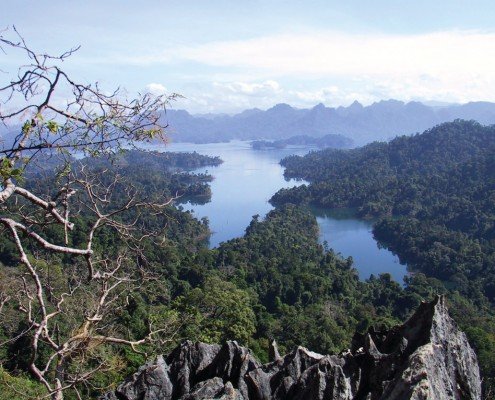 About 50 million years ago
What the Himalaya and Khao Sok have in common
It was when plate tectonics caused the Indian and the Eurasian plates to crash, that massive forces turned and moved the whole of Thailand around. The rocks were uplifted and folded and started to erode. It was that same historic event that uplifted the Himalayan Mountainssome 2000 kilometres away.

10’000 – 50’000 years ago
Too long ago to remember
It cannot be said for sure who first lived in the forests and caves of Khao Sok. It is well possible that people have inhabited the area since the Stone Age, even though no evidence for this could be found yet. Before the end of the past ice age ended, some mere 10’000 years ago, there might have been a land bridge from Borneo to Thailand, enabling Migration.

The 18oo’s
The jungle hideout
When the Burmese attacked the south western coast of Thailand, many local people fled into the jungle. The land they found proved to be rich of wildlife, rain and fertile soil. Soon, the news spread and more people moved into the so-far little known terrain.

1944
Village of the Dead
The population in the region thrived until suddenly an epidemic killed all but a few inhabitants. Those who survived moved away, leaving the place abandoned and eerie. The village became known as “Ban Sop”, meaning “Village of the Dead”. Rumours go that the name derived from an unusually shaped mountain in the area called Khao Sop (“Corpse Mountain”). It is hard to tell which came first – the name or the unfortunate incident. In any case, “Khao Sop” was twisted into “Khao Sok” to make it sound a little more inviting.

1961
The jungle highway
It is a beautiful line of concrete: The “401”. Leading through the midst of the rampant rainforest and Limestone Mountains, it is the only highway from Phangnga province to Surat Thani Province, connecting the Andaman coast with the golf coast. It was constructed in 1961, and brought new possibilities for settlement, plantation and industry. Unfortunately, it also meant nature throughout Khao Sok national park was threatened with the arriving people because of modern hunting weapons, mining and logging.

The 1970’s
The tragic story of Khao Sok’s unintended protection
The 1970’s was a time of political unrests. Students protested against the military government which resulted in some tragic events in the Thai history no-one likes to remember. On the 6th of October in 1976, the military group launched a bloody assault on student protesters at Thammasat University in Bangkok. Officially, 41 students died in the massacre, but the real numbers are thought to have been much higher. “Hard to remember, yet difficult to forget”, stated the national newspaper “The Nation” thirty years later. In a similar event prior to this one on October 14th, 1973, dozens of protesters were killed. 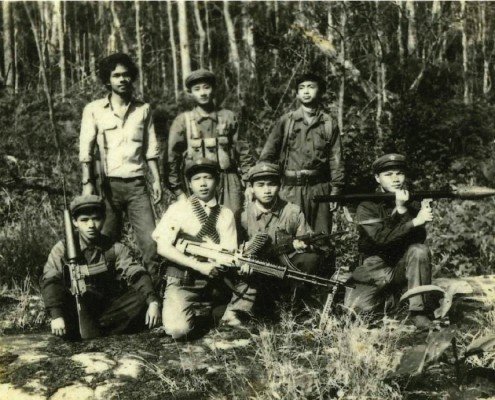 It was during that second military coup that 170 students fled for their lives into the deepest untouched forest of Thailand. They too had joined the communist insurgency groups and were hunted by the military forces. Setting up a stronghold in Khao Sok, they kept away everyone who was not welcome. PVC pipes were filled with explosives and buried around the stronghold, and armed students observed the area. During their seven year occupation between 1975 und 1982, they not only kept the Thai Army at bay, but also the loggers, hunters and miners. Not even a desperate wildlife poacher would have dared to enter this combat zone. Miraculously, only one student got killed in the entire period when he ran into a military group while patrolling. When the government finally changed in 1982, one by one the students found their ways back home. Apparently, the last “communist” left Khao Sok in 1989.

Were it not for those rebels, the wild forests of Khao Sok national park may well have already given way to commercial plantations and exploitation of natural resources. Their aim was obviously rather to protect themselves than to conserve the environment; but only because of their unintended protection Khao Sok later qualified to become a National Park. 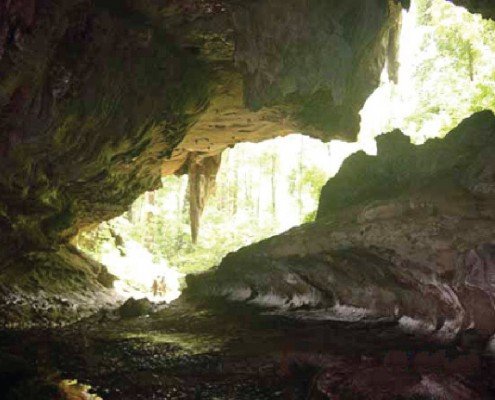 It was also during that period, that both the EGAT (Electricity Generating Authority of Thailand) and the National Park Division showed considerable interest in the area. Research from the government and EGAT proved Khao Sok to be the largest watershed in southern Thailand, while research conducted by the National Park Division found an unexpectedly rich biodiversity, definitely worth being protected.
The hidden entrance to Namtaloo (Nam Talu) cave, one of the students’ hideouts. It served as a “hospital” and as an emergency fleeing point whenever Thai army helicopters were firing their mortars.

1980
Thailand’s 22nd National Park
The in-depth investigations of the National Park Division discovered many rare animal species and types of vegetation in and around Khao Sok that made it more than just a potential elephant jungle sanctuary. Furthermore, the area featured an outstanding landscape: Spectacular karst limestone formations, craggy cliffs, mystical caves as well as an uncountable amount of waterfalls. The process of protecting the area began and it was decided that all mining and logging must stop.
On the 22nd of December 1980, Khao Sok was officially announced the 22nd National Park of Thailand.
At that time, the park covered an area of 645.52 square kilometres. 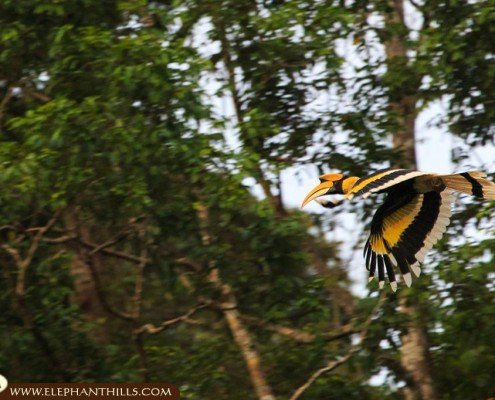 Wildlife and Nature in Khao Sok national park
Hornbills are said to be found only in areas with intact nature and perfectly balanced rainforest. They can often be seen in Khao Sok in pairs or big flocks.

1982
A double-edged sword
The ink was barely dry on the entitlement paper when a huge part of the Khao Sok National Park was flooded by the EGAT to create a 165 square kilometre big reservoir to generate hydro-electricity. The boundaries of the nature park had to be adapted, and the flooding process was a disaster for wildlife. Forced to leave their territories, many animals got trapped on the more than 100 islands created by the rising water levels. The EGAT funded and attempted the biggest wildlife rescue operation in Thailand’s history. Sadly it was largely unsuccessful and rather soothed guilty consciousness than saving wildlife. From the 1,364 captured animals, most died of stress and many were relocated into areas already overcrowded by the other refugees…

Today, the Khao Sok National Park’s boundaries have been stretched to cover 739 square kilometres and include the lake, which is meanwhile a popular tourist vacation destination. The hydro-electric power produced also serves large parts of the Southern Thai population in a sustainable way. To certain extends it means protecting environment at the expense of it. Sacrifice a little to gain a lot.
Each sword has two edges, they say; if it kills or protects depends on the possessor. In Khao Sok national park, it meant kill to protect.
Now it is up to us how the gripping history of this breathtakingly beautiful place will continue…