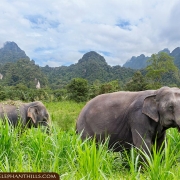 The Asian elephant population has seen a dramatic decline over the past century. In 1986, the International Union for Conservation of Nature (IUCN) classified the Asian elephant (Elephas maximus) as “endangered” on its Red List of threatened animals. 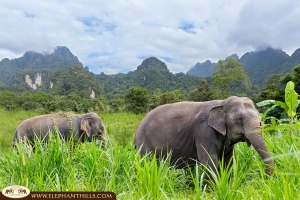 The number of elephants in Thailand has declined from around 100,000 at the beginning of the 20th century to approximately 5,000 today. Difficult to count, experts assume that only 2,000 to 3,000 elephants are still living in the wild, while 2,700 are domesticated.

If not now, when?

Considering this issue, it is high time to make essential changes to save the rare gentle giants. At Elephant Hills we’re absolutely dedicated to save these magnificent species into the next century, to ensure our kids and grandkids experience them in their natural environment as well. We are giving them a home, which equals their natural surrounding, ensuring enough space and freedom, love and care, as well as plenty of food to provide adequate nutrition.

Did you know that an elephant eats betwenn 100 and 200 kilogram per day?

Where The Wild Things Are – published by Pax Magazine

Get 10% OFF if you book 6 months in advance, and you can cancel your booking FREE OF CHARGE four weeks before your tour starts.