These truly unique habitats are found across the globe, from central and south America to Australia and the island of New Guinea. Each one offers an intriguing array of stunning animals, but what are some of the most beautiful rainforest animals in Thailand? We thought we would take a closer look at some of our favourites. 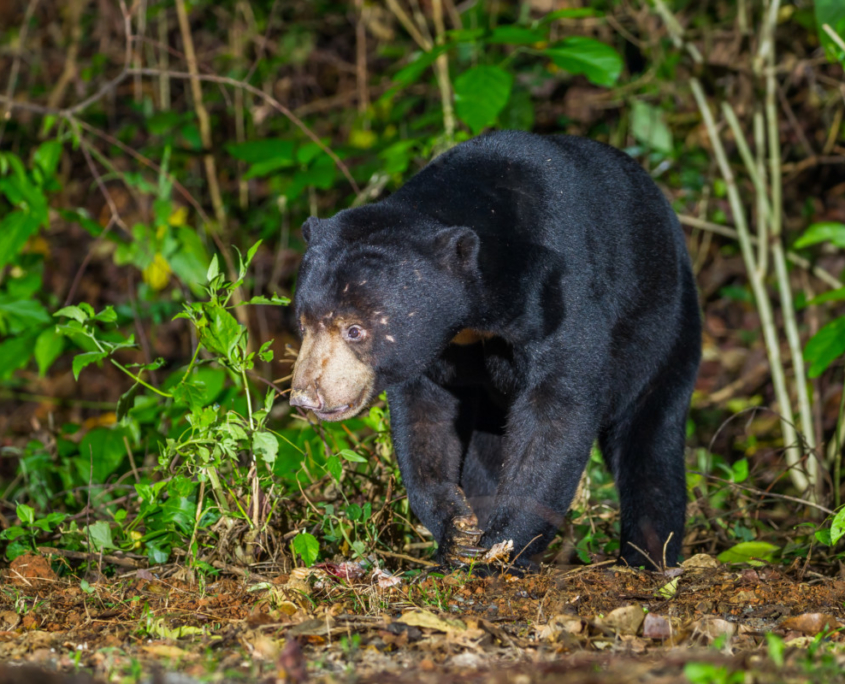 The Malayan Sun Bear is one of the reclusive rainforest animals that can be found across the dense forests of Southern China, Eastern India, Indonesia and of course Thailand. Their name derives from the golden patch on their chest, which is said to resemble the rising sun.

They are known for their muscular appearance alongside their short muzzle and small ears. Often found in warm conditions, the Malayan Sun Bear has a short and sleek coat to help keep them cool but thick enough to protect them from heavy rain and sharp branches.

With an excellent sense of smell and a long tongue and claws, the Malayan Sun Bear is able to find food amongst trees, termite nests and bee nests. 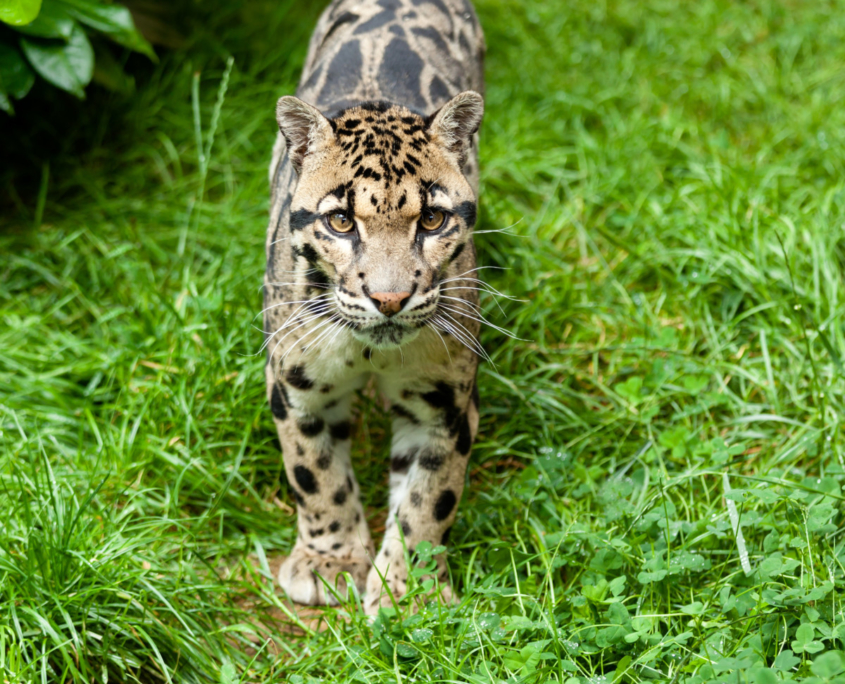 Typically found in the forests of southeast Asia, the Clouded Leopard is an incredibly rare animal that remains as intriguing and mysterious today as it did when it was discovered 200 years ago. The name comes from the cloud-shaped spots across its body, and the animal is known for being larger and stockier compared to other cats.

The Clouded Leopard features unique eyes, which, unlike other big cats, never get fully round. They also do not shrink or go vertical like small cats. Instead, they remain in an oblong shape, making the cat instantly recognisable. The Clouded Leopard also has one of the longest tails in any big cat, ensuring it has incredible balance when walking along branches.

Typically a more nocturnal animal, the leopard is able to open its jaw wider than other species of big cat, allowing them to easily target their chief prey of small animals such as gibbons, slow loris, and macaques. 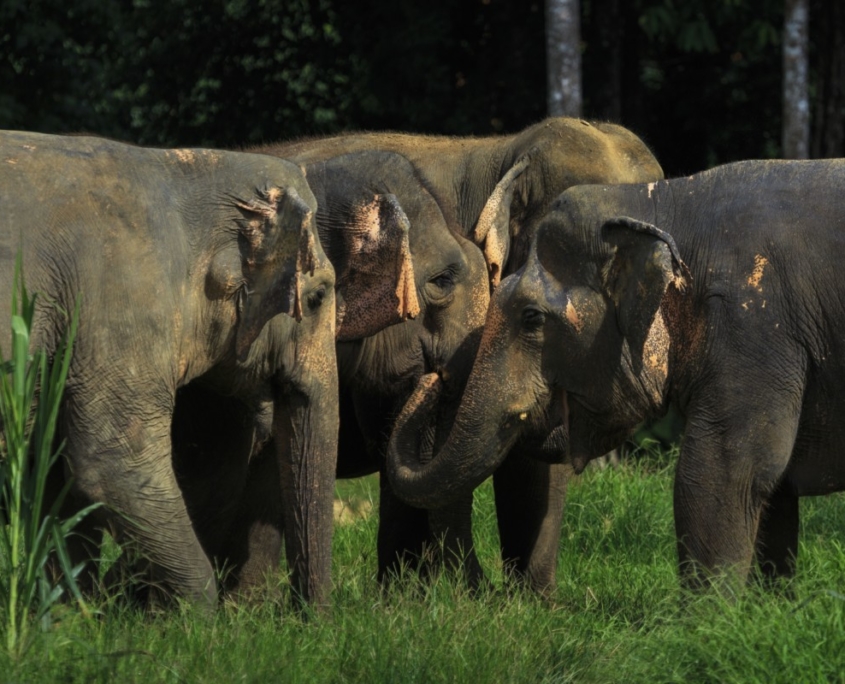 While you might envision wide open plains when you think of elephants, they are also a very common inhabitant of the dense rainforests. Forest elephants are smaller than their African counterparts and feature more oval-shaped ears alongside straighter tusks that tend to point downwards.

These elephants will live in groups of up to twenty and will forage on the abundance of leaves, tree bark, grass and fruit that are typically found amongst the rainforests. This foraging also plays a vital eco role, helping to spread seeds across the forest, keeping the ecosystem thriving. 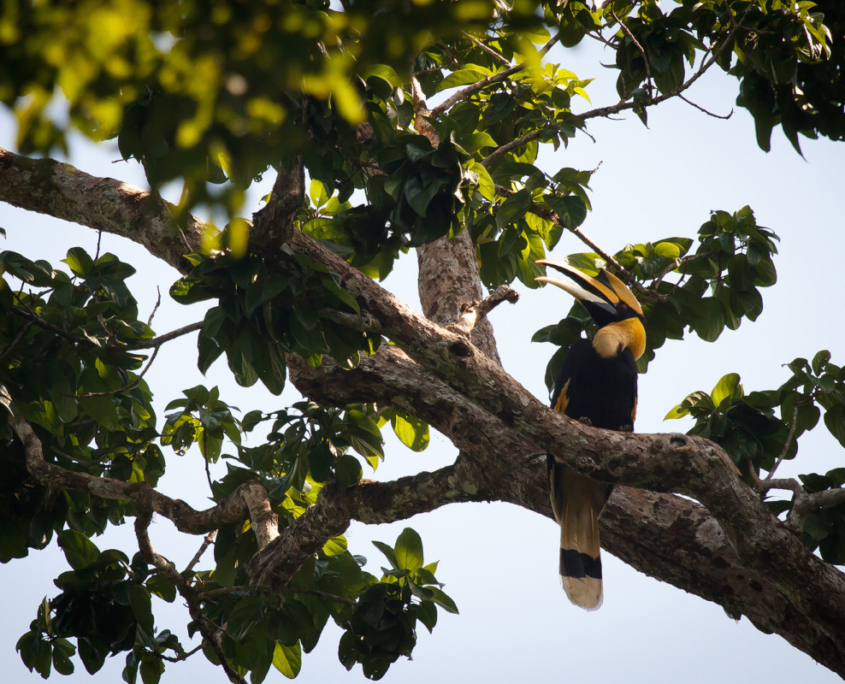 The rainforests are home to a wide range of birds, including multiple species of the instantly eye-catching Hornbill. From the Great Hornbill, which is found across India, China and Southeastern Asia, to the Rhinoceros Hornbill of Borneo, these birds are an amazing spectacle to watch, and there are 54 known species of Hornbill across the globe.

Living high in the canopies of the rainforest, these birds’ shelter in holes amongst the trees and are capable of covering vast areas of the forest every day in the hunt for food. While their primary diet is fruit, Hornbills are also known to eat lizards, insects, snakes and other small mammals.

These birds are instantly recognisable by their unique beak, which allows them to harvest food, amplify calls and build nests. 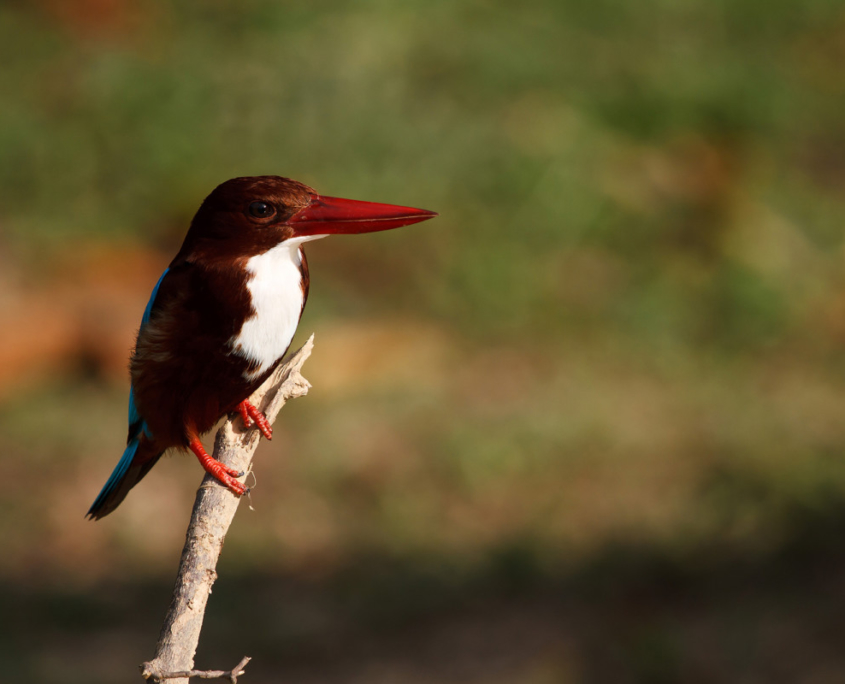 Just like the Hornbill, there are a huge, varied species of Kingfisher living amongst the rainforests. There are some 16 different types living across Thailand, each one offering an incredible spectacle to everyone who sees them.

Known for their vibrant colours and beautiful plumage, Kingfishers come in all shapes and sizes and are typically found high in the trees. Nesting amongst the tree trunks, the birds feed upon large insects and small lizards alongside fish, shrimp and other aquatic animals, plunge-diving into rivers to catch them. 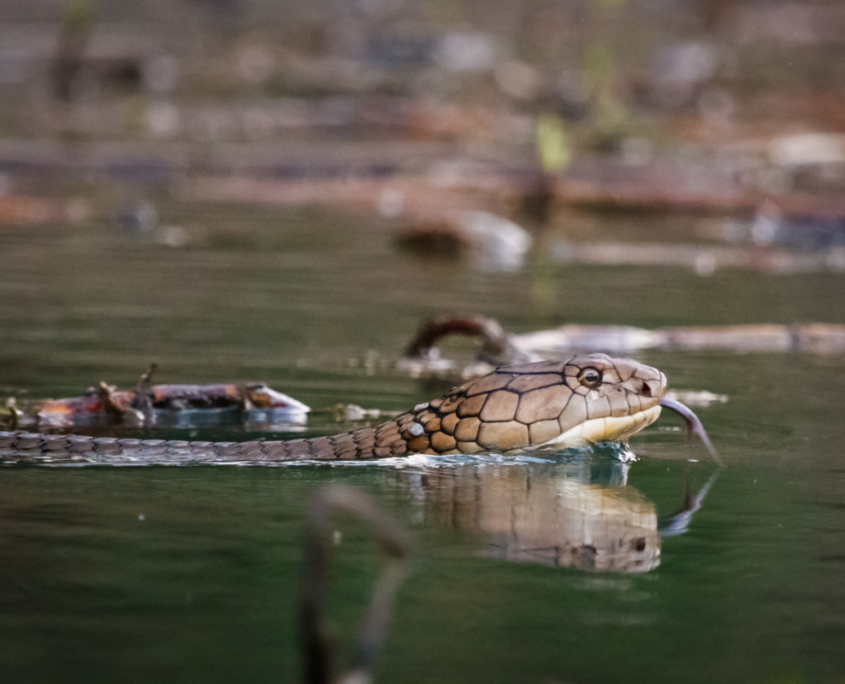 The mighty King Cobra is the longest of all the venomous snakes and is one of the most venomous animals in the world. While it spends its time slithering along the floor, the King Cobra is able to lift a third of its body off the ground, allowing it to effectively stand up and face any predators.

Thankfully, they are an incredibly shy creature and will avoid human contact whenever possible. While they are highly venomous, it is not their first defence mechanism. Instead, the King Cobra will typically flare out the hood on its neck and growl at predators.

Coming in a range of colours, King Cobras typically feed on other snakes, lizards and mammals. They are also the only snake in the world that builds a nest for their eggs! 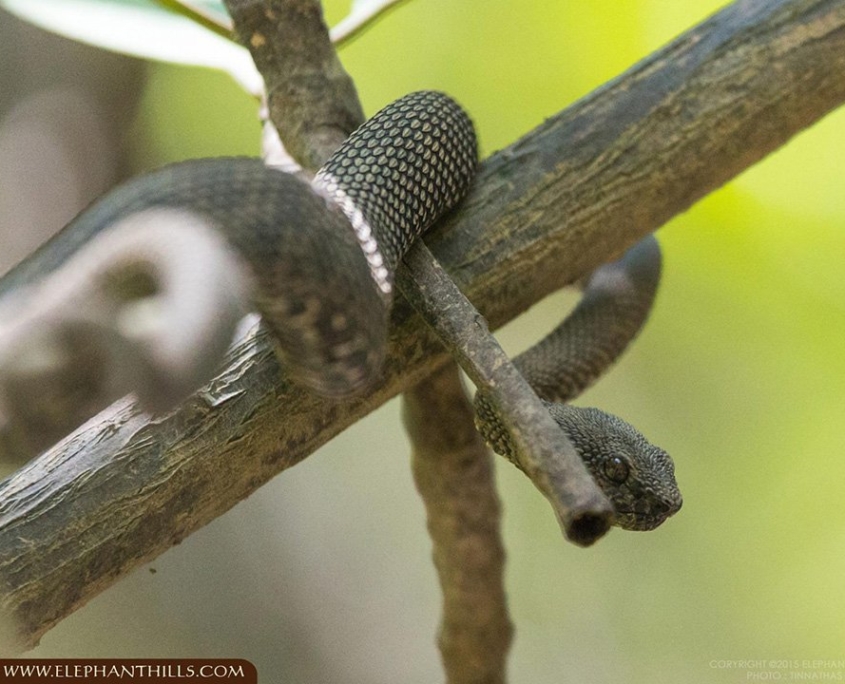 Found across the rainforests of Thailand, the Mangrove Pit Viper or Short Pit Viper, as it is otherwise known, is located near water and very wet areas, giving it its name. Capable of growing up to a metre in length, they tend to come in a dark brown or black colour, allowing them to blend in with tree roots. However, it is not unknown to see lighter snakes with various colourations, even white.

Like most snakes, the Mangrove Pit Viper feeds upon frogs, lizards and other small animals, using its heat-sensing lips to detect the movement of prey. Living amongst the base of the trees, they typically come out at night and are able to strike out on prey incredibly quickly, making it hard to escape once it has them in its sight. 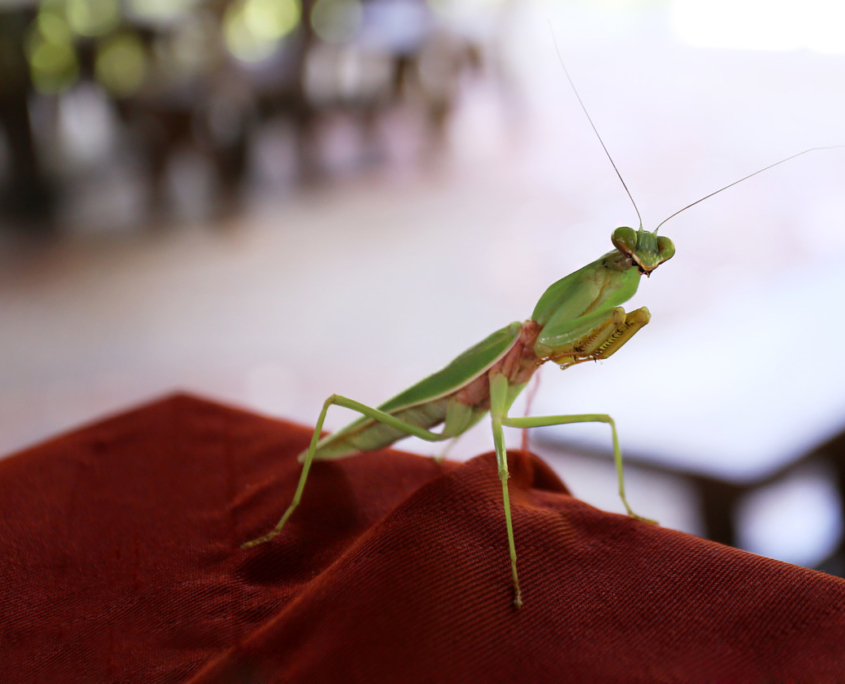 Named for its prominent legs, which make it appear like they are in the position of prayer, the Praying Mantis is an incredible predator. Capable of turning their head 180-degrees in each direction, they have complete awareness of their surroundings, while their green and brown colouring ensures they can blend in amongst rainforest foliage.

With a diet consisting of predominantly insects, the female of the species has been known to eat her male counterpart after mating. Their quick reflexes and powerful legs ensure they can snare their prey with ease. 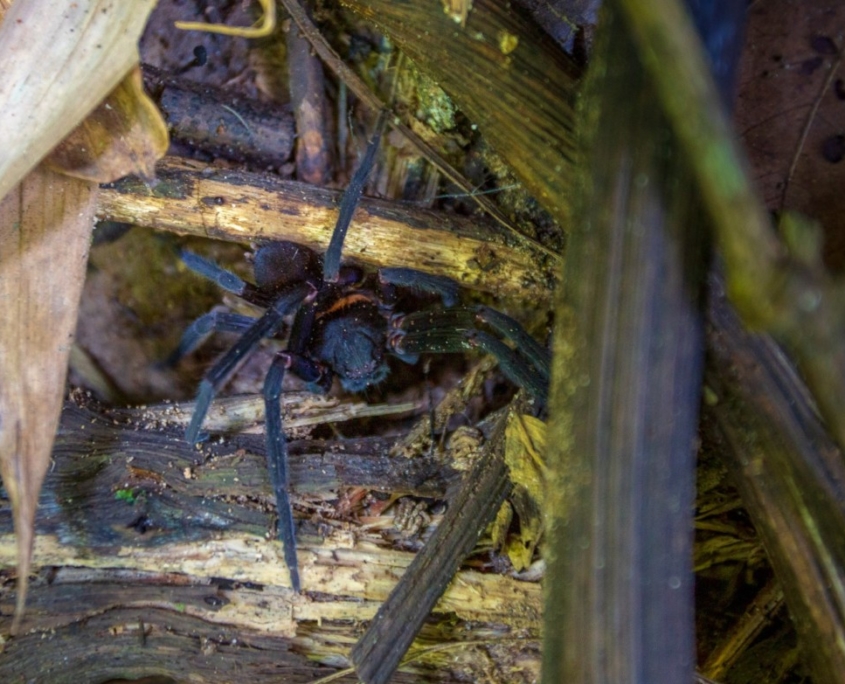 The Thai Black Tarantula is one of only three tarantulas that call the country home, and is easily recognisable thanks to its fully black and furry body. These stunning creatures live amongst burrows in the dense undergrowth of the rainforest, preferring humid locations that are hidden from direct sunshine.

Capable of growing up to 15cm in diameter, the Thai Black Tarantula will eat small birds, frogs, lizards and insects. Typically waiting motionless outside their burrows, the spider waits until it senses the vibrations of its prey nearby before striking with incredible speed and aggressiveness.

If you are looking to discover the beautiful animals that call the rainforests of Thailand home, then Elephant Hills is here for you. Our unique jungle camps and award-winning tours will help you to discover the spectacular tropical environments.

Want to find out more? Check out our range of tours today or get in touch with our team, who will be happy to help.

Why We Love Elephant Hills
Scroll to top